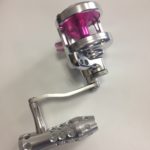 Ball bearings –  help the reel function and run more smoothly, reduces friction and can take pressure off other mechanics within the reel. So, does the more ball bearings in a reel make it better than one that has less bearings?  Yes but not always. It depends on the quality of the bearings used. A reasonable reel in reputable brands such as Shimano, Daiwa or Penn may only have 3 or 4 bearings but still make a half decent reel due to their use of quality bearings.

Gear Ratio –  is how many times the spool revolves in the case of an overhead or how many times the rotor will turn on a spinning reel per crank of the handle.  So, say you have a spinning reel and it’s said that it has a 6:1 gear ratio this means that the rotor should turn around 6 times per 1 complete 360-degree revolution or turn of the handle. High speed reels usually are any reel with a gear ratio of around 5.6:1 or more and lower speed reels are generally reels that have a speed of 5.5:1 or less.  High speed reels make ideal choices for those that spin with lures and need a quick retrieve and lower speed reels make great reels for those that fish the depths for large powerful fish and require more extreme cranking power compared to speed.

Max Drag –  Most brands are starting to publish their maximum drag ratings in their product specs and it is an increasingly popular metric that some anglers like to use when considering their new reel. It gives the angler an idea of just how capable the reel is and where metric is particularly useful is for the angler that likes to keep their outfit as light as possible but wish to fish with a heavier line class.

The post About fishing reel technical appeared first on Kmucutie.

FREE Mold Making To own your unique jigging on orders over $2000 per model!