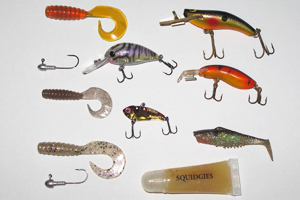 Please Note: Bag limits, minimum and maximum lengths are subject to change and review by your State Fisheries Department.

The Dusky Flathead is the largest of all Australian flathead. Most commonly caught between 40cm and 60cm, however it can reach 1.2m and weighing up to 15kg. 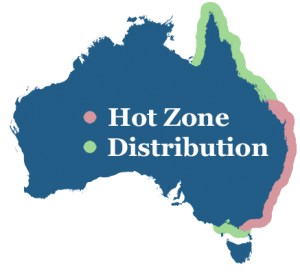 Dusky flathead inhabit estuaries from the river mouth right up to brackish water between the depths of 1-20m and to a lesser extent beaches and headlands adjacent to river mouths. They prefer a soft sand or mud substrate but quite often hang around patchy sand, rock and weed. Focus your activity along the edges of channels, drop-offs & around weed beds on sandbanks

Duskies will readily take live baits and pretty much anything else you can think of but arguably the most enjoyable and sporting way to target them is on lure. You need an outfit that will maximise casting distance allowing you to cover more ground per cast, and a variety of soft and hard-bodied lures for different applications. Starlo and Bushy revolutionised the soft plastic phenomenon with the invention of the squidgie and to this day soft plastics are the preferred choice amongst many top anglers so give them a go next time you’re out.

Live fish: Larger duskies will usually engulf livies whole and sometimes bite you off so use a heavier leader of around 20lb and 2ft in length. Use a suicide or octopus style hook and as small a sinker as possible running freely above the swivel allowing the bait to swim around somewhat naturally.

Other bait: Similar to above but run the sinker between the hook and the swivel for better bite sensitivity. Choose a hook to match your bait choice and reduce leader strength to 10-12lb. 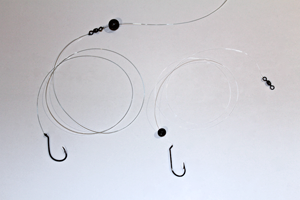 Sand Whiting are one of Australia’s largest whiting and can grow to more than 1kg but fish to about 500g are more commonly caught.

Please Note: Bag limits, minimum and maximum lengths are subject to change and review by your State Fisheries Department.

A Snapper’s colour varies from reddish pink to reddish bronze on the upper sides and silver white belly. Juvenile snappers’ upper body areas are covered by small neon blue spots which fade as snapper mature. Older fish may develop a hump on the top of the head and more dominant in males. Snapper mature at 3 years of age living for around up to 40 years years and grow up to 130cm at around 20kg.

Snapper are found along the Queensland, New South Wales, South Australia, Western Australia and Tasmanian coasts to depths up to 200m.

Snapper will take a wide variety of lures. Soft plastics would be up there with the most effective methods. Examples include Squidgie whip baits, Zman Jerk Shads and Zman Grubs. Snapper will also take hard and soft vibes, trolled hard body lures and even metal slugs.

Barramundi fishing is a hallowed activity in Australia, as it requires land-based anglers and boaties to travel to the northern reaches of the country. The sheer challenge of catching a barramundi makes it oh-so satisfying to catch.
Australian Bass
Australian Bass are prized and exciting recreational sportfish. Australian Bass are often olive-green to bronze coloured along the back, becoming cream or silvery along the belly, the fins are mostly dusky brown to black. The tips of the anal and pelvic fins are white. Juvenile fish under 12cm long are banded and have a dark blotch on the gill cover. Australian Bass grow to 60cm and can weigh up to 4kg, although more frequently caught at around the 35cm or 1kg mark.

Where To Fish
Australian Bass are found in fresh and saltwater, it inhabit the upper reaches of coastal rivers and lakes between the Sunshine Coast QLD south to Wilsons Promontory VIC. They spend most of the year in the fresh but move down into the estuary during winter to breed. They are also stocked in a number of impoundments. When targeting Bass look for areas of structure such as; fallen trees, rock bars, thick vegetation and deep pools generally adjacent to the deeper edge of the river.
There are 3 main ways to target Bass including:
1) throwing sub-surface lures around structure
2) surface luring
3) fishing well presented live baits.
Bass can be taken on a variety of live offerings but arguably the most enjoyable and sporting way to target them is on lure. Whether targeting Bass by foot or by boat, find a promising piece of structure and approach it with stealth. Get yourself within casting distance but no closer and cast towards the structure, working your lure away from it. If you hook up go hard and keep the fish’s head moving forward.
Rod & Reel
To get more enjoyment out of your Bass fishing it’s best to adopt a finesse approach with a lightweight, light line outfit. Go for something like a 2-4kg 7-foot graphite spin rod and a 1000-2500 size reel to suit.
Line and leader
Lure: 4-6lb braid. 1.5m 5-8lb monofilament (surface) or fluorocarbon (sub-surface) leader. Fish heavier if you encounter regular bust-offs.
Bait: 4-6lb monofilament & 0.5-1.0m 5-8lb fluoro-carbon leader. As above regarding bust-offs.
Terminal Tackle
Lure fishing: Trebles – Decoy YS 25’s, Owner ST-11’s, or VMC. Jigheads – 1/32 – 1/4 oz to suit depth.
Bait fishing: Size 1-6 hook, size 4-8 swivel, size 0-2 ball sinker but limit weight where possible. Un-weighted if using live insects.
Best Lures
Surface: Jitterbugs, Crazy Crawlers, Megabass baby Griffon Zeros, Lucky Craft NW Pencils.
Sub-surface: Most Vibe, Jackall, Megabass, spinnerbaits, Ice jigs or blades. 80mm Bloodworm Squidgie Wrigglers.
Best Bait
Best baits are live insects, yabbies, garden worms, grubs or any crawlies found in the area.

The trend amongst anglers targeting Bass on lure would have to be braided line but monofilament also has it’s advantages. Attach the mainline to a 1-2m fluorocarbon or monofilament (for surface luring) leader with a joining knot such as an Albright or Double Uni. Attach the leader to the lure with a loop knot such as a Lefty’s Loop, Perfection Loop or Rapala Knot. This will optimise its action and allow the lure to swim freely in the water. 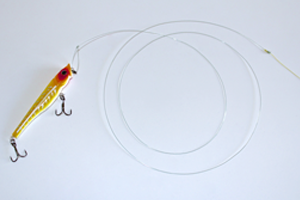 Rigs vary between anglers and states but a simple rig that works consists of a size 1-6 hook, 0.5-1m fluorocarbon leader, and a running ball sinker either between the hook and swivel or running freely above the swivel. When using bait use as little weight as possible. In some situations no lead is possible, which is a great way to present live insect baits on the surface. Bait up with a live cicada or garden worm and you’re in business. When preparing the bait be sure to expose the point of the hook. 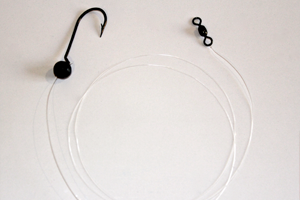 Tailor
Size
Maximum of 16 kg and 1.2 m in length.
Distribution
Tailor are found from Fraser Island in Queensland around the coast to
Point Quobba in Western Australia (including Tasmania).
Lower numbers are generally found around southern Australia.

Tailor is also known as Chopper, Bluefish, Skipjack, Skippies, and Tailer.The Tailors colour is greenish blue along the back fading to a silvery belly area. Tailors fins are translucent pale green with yellowish tinge. The Tailors distinctive features are the lower protruding jaw passing the upper jaw which is filled with razor sharp teeth and the compressed elongated body down to a powerful large forked tailMost commonly caught up to 4kg however can grow to over 1mtr and more than 10kg.

Catching tailor can be a tough challenge for even the more experienced anglers.

Bait – Tailor will accept baits of horse Mackerel, Western Australia pilchards, sea garfish, and fresh strips of slimy Mackerel and mullet. The best lures to use in order to catch Tailor would have to be surface poppers, as Tailor love these and will strike with spectacular and explosive power. You could also try minnows, chrome spoons and leadhead jigs.

Rod and Reel – Fishing for Tailor in bays and estuaries requires a medium to fast taper boat rod with a sidecast reel or eggbeater reel. Fishing off the beach requires a surf rod and sidecast reel however a good quality spinning reel can also be used.

Luderick inhabit estuaries and coastal waters at depths up to 20m, between southern QLD and TAS. This guide focuses on targeting Luderick in near shore ocean environments, but the same principles apply to estuary fishing. In the ocean, Luderick school in shallow rocky areas adjacent to wash, around headlands, near shore islands and reefs. Winter is a good time to target them in areas where they congregate daily, year after year.

Fish a suitable location where your berley will hold without being swept away in the current. Anglers who target Luderick fish with long fast taper rods, around 8-9ft when fishing from a boat up to 12-13ft when fishing off the rocks. Throw in small hand fulls of berley regularly. Position the float stopper so that your bait sits about 400mm off the bottom and weight your rig so that the float remains upright with the top 1.5 inches out of the water. When the float disappears, count to 2 or 3 and lift the rod firmly rather than striking hard. Play your fish out rather than skull dragging to avoid straightening the hook.

When fishing for Luderick you’ll need a long rod with a sensitive tip, strong butt, and a big stripper guide. A longer rod aids in maneuvering the long rig during casting and retrieving and also when playing fish around the rocks. A light 8-9ft rod is suitable for boat fishing while a slightly longer 12-13ft rod is more appropriate off the rocks.

The traditional reel choice would be a small 4-5 inch centrepin or sidecast Alvey, however it depends on personal preference, a small 2500-3000 size spin reel will do just fine. Choose an outfit that is balanced, lightweight and feels comfortable for long periods of use.

Luderick are caught in estuaries and near shore waters around break walls, rock outcrops, headlands and shallow reefs. Fishing for Luderick is an art form. Among the many trade secrets, anglers use fresh weed and berley to bring home a good feed of Luderick.